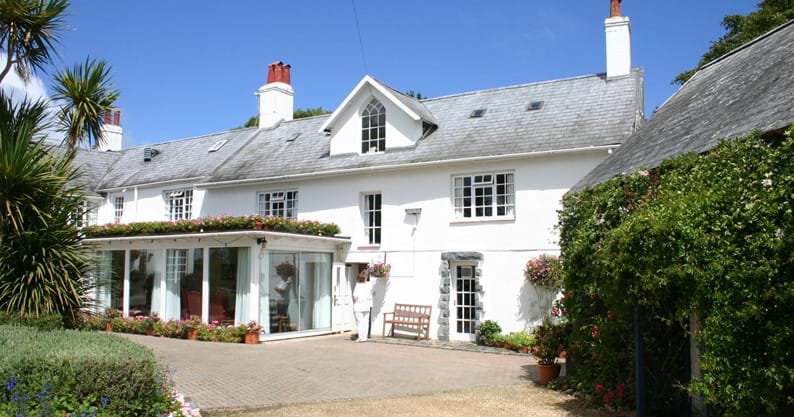 They tragically lost their eldest son, Andrew, in an accident and decided to name their charity, The Andrew Mitchell Christian Charitable Trust, after him.  Shortly after this Greville and Lisa lost several friends to cancer and watched them die in less than ideal circumstances.  Despite being told that there was no need for a residential hospice locally as the requirement for a population of the Bailiwicks size was only 0.74 of a bed, they believed differently, and when told by the authorities that they would get no help initially or in the future, their resolve to create a hospice strengthened.

The couple searched for a property which would be suitable, it needed to be open market to enable it to be accessible to all residents of the Bailiwick, it also needed room for day-care and residential services and to be accessible to visitors and ambulances - their ultimate aim was that it needed to feel like 'home' to the residents and families.  The hospice building was identified after a package was incorrectly delivered to Les Bourgs, Rue du Tetre, St. Andrews, rather than to Le Bourg, Route du Tetre, Castel.  Lisa went to collect the package.  They knew the house was on the market, but had ruled it out due to its price, but as she drove in she knew this was the right property and Greville felt the same.

The owners at the time were sympathetic to their plans and Greville purchased the Open Market property, before even having permission to convert it as he knew it was just meant to be.  He then project managed the development over a two-year period and when it opened in 1991 he provided enough money to run it for the first year.

Maura Stacey was appointed as the first director of nursing and was the heart of the hospice, she did an outstanding job of bringing together a superb team and taking the cause out into the community, where it still remains.

Les Bourgs Hospice was opened as a 5 bedded unit, within the confines of the original building there were two single rooms and a three bedded unit

In the early 2000s the Board of Governors made the decision to consider a redevelopment. They started looking for a new site but, following discussions, decided to remain on the current site and to purchase a site adjoining the original property to increase the footprint of the hospice site.

In October 2006 the Board of Governors appointed Jo Boyd as the director of nursing.   Mrs Jo Boyd MBE came with extensive knowledge of expanding hospices in the U.K. In 2007 first plans were submitted for the development and they were rejected, these were then amended and a decision to purchase another piece of land was made.  The plans were then accepted and the new hospice plans were born. The cost for this redevelopment was estimated to be £4 million and many people felt that this was unnecessary and unachievable, but with the amazing work of the staff, Friends of Les Bourgs Hospice and the generosity of the Bailiwick public the Hospice reached their fundraising target in October 2012, 10 months after the first patient was admitted.

The Hospice was officially opened on 19th July 2012 by their Royal Highnesses The Prince of Wales and the Duchess of Cornwall.

< Back to About us